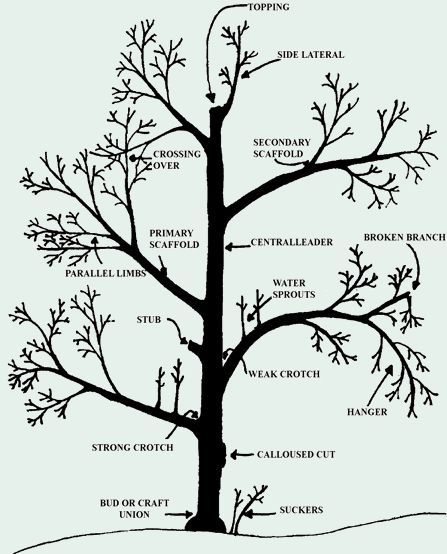 Fruit trees should be pruned to improve the quality of the fruits, to reduce the size of the tree so fruits are easy to harvest, and to develop a strong tree framework that can support heavy crops without breakage.

The best time to prune fruit trees is in late winter or early spring (March and April) just before growth begins. Early winter pruning can cause low temperature injury (winter injury). Late summer (late July and early August) pruning is good to restrict growth and to remove water sprouts, and diseased or damaged wood. During summer wounds heal faster, and the cuts won't stimulate so much new growth. Don't prune after mid-August because it can cause winter injury.

The goal of pruning is to keep the tree open and of a manageable size, so that there is enough air movement in the tree to prevent diseases and to make sure all leaves get sufficient light. This way the tree will be able to produce high quality fruits. However be careful not to remove too many branches, as pruning stimulates new growth but not fruit production.

The primary aim of pruning is to remove weak and unproductive branches.
Remove

The most important period for pruning and training apple trees is the first 4 to 5 years after planting.

The easiest training system for home gardeners, is the central leader system. Here the tree form is conical in shape, with a wide base and a narrow top. It looks like a Christmas tree and consists of 6-8 main scaffold branches distributed vertically and spiraling around the trunk.

Pruning at Time of Planting

When you plant your tree, remove only broken, damaged and poorly positioned branches. Allow it to grow for one season. 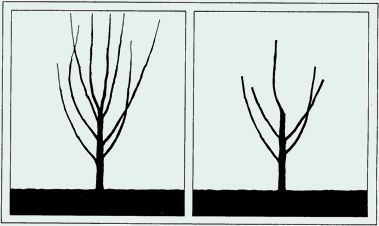 The following spring, choose three or four shoots to form the main scaffold branches. Select scaffold limbs which have wide angles with the trunk, preferably more than 45 degree. If the angle is too small bend the lateral branch down. (see Spreading)

Scaffold branches should be at least 6 inches apart on the trunk and be distributed on different sides of the tree for good balance. No branches should be directly opposite or below another. The lowest scaffold branch should be about 24 inches or more above ground. It will always be the same height, no matter how large it gets. So be sure it doesn't start out too low (lawn mowing, deer etc.). Prune the selected branches back to about 1/2 to 1/3 of their length to promote side branching. Always head back to an outward-growing bud. The top lateral, which will form the leader, should be headed back to about 18 to 24 inches above the top scaffold branch. Remove everything which is not necessary for the future structure of the tree. 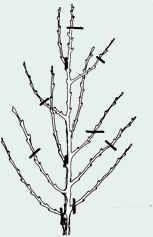 The second year select two or three more scaffold limbs. Top back the more vigorous limbs so they have a height equal to the weaker limbs. Head back the rest of the scaffolds slightly to encourage branching. Like the year before, all the new growth takes place on the permanent scaffold limbs.

Any branch that competes with the leader, or crowds the chosen scaffold branches, should be thinned out. Head back the central leader about 20" above the highest permanent lateral shoot. This stimulates the growth of lateral shoots from which additional scaffold limbs will develop. 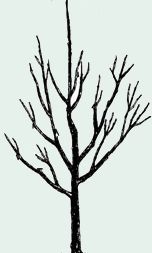 Repeat the second year pruning, if there are still scaffold limbs missing.

After 5 to 7 properly positioned scaffold limbs have developed the scaffold selection should be complete. Now do only minimal pruning until the tree is bearing, because pruning means new growth and the delay of fruiting.

Keep the leader dominant. Shoots competing with the leader should be removed. Remove suckers and water sprouts as they develop. Keep smaller branches that are not so vigorous and have a broad angle to the trunk. They can be left to set fruit, and should not be headed.

Treat each of the scaffold branches as a young tree. That is, don't allow laterals of the scaffold branch to compete with the leader of that branch. Thin out some of these new shoots and save only 2 to 4 of them. To maintain the correct conical tree shape, lower scaffolds should be larger and extend further from the trunk. The upper branches must be kept shorter to keep the lower ones from being shaded. In general, heading back scaffold limbs should be avoided.

Annual pruning is necessary to make sure all branches get good light exposure and to maintain the pyramidal tree shape. Try to develop about 60% of the tree's total volume in the lower scaffold area. This provides good access to light throughout the tree, and makes it easy for care and picking. Upper lateral branches and scaffolds need to be headed back regularly to maintain the conical shape. Cutting back the central leader to a well-placed outward growing branch may control tree height. Maintain an open structure in the center of the tree. See pruning rules. Prune young bearing trees lightly and mature trees more heavily, especially if they have shown little growth.

Young pear trees are trained like apple trees. They are more upright growing. It is a good idea to spread the branches to develop wider crotch angles. Cutting back the central leader to an outward-growing branch can reduce tree height.

Thin out weak fruiting wood on older trees annually to increase the size of the fruit and to stimulate the production of new wood which bears next year's crop.

The pruning of stone fruit trees in the early stages follows the same pattern as that for apples. After establishing the main structure, they do not need to be pruned as frequently or as precisely as apples and pears. Pruning consists mainly of removing crossing, weak, vertical and diseased wood, and thinning out watersprouts and upper branches to open up the tree. Avoid heavy cuts, which stimulate watersprout growth.

Be careful not to head the scaffold limbs back, as they tend to stunt terminal growth. Since sour cherry wood is quite brittle, give special attention to developing wide-angled crotches in young trees. Five or less main scaffold limbs is usually enough for a sour cherry tree.

In some years plums set too many fruits and need thinning for proper fruit development (see thinning fruits).

After some years a renewal of the tree may be necessary. Head back a few branches just above an outward pointing lateral branch.

Cherry plums are small trees, which bear well for the first few years with little pruning. Only prune them back to stimulate growth of new fruiting shoots and to reduce breakage from heavy loads of fruit. Older trees should be pruned to remove old wood and encourage new growth.

Apricots produce fruits only on 1-year old wood and must be pruned to encourage new growth to provide fruiting wood. Once they begin fruiting, make a few larger cuts each year to encourage development of fruiting wood for next season.

Whenever you are pruning back a branch always cut it on an angle and just above some part of a stem that will continue to grow: to a bud or to another branch. Always prune above an outward pointing bud or lateral branch to encourage a spreading habit or growth.

Do not leave stubs when pruning. Make cuts close to the trunk but do not remove the collar. The collar is a slightly raised ring of tissue where a branch joins the trunk. It is the protection of the tree against invading diseases and wood rotting organisms.

Heavy cuts should be made in several steps: 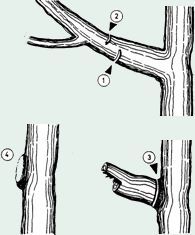 Do not use pruning sealers as they keep the wound moist and slow down the healing process.

There are two basic types of pruning cuts: 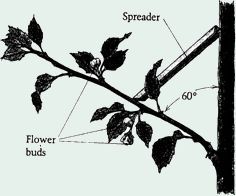 The ideal limb position is about 30 degree above horizontal, creating a 60-degree crotch angle. This allows maximum fruit production while still promoting growth of new wood for future fruiting. In addition, branches having a wide angle between the limb and the trunk are stronger than upright branches with narrow crotches.

The best time to bend young upright growing scaffold branches is in June when they are 3-6 inches long and still soft. They can be held in place by using wooden clothespins or sharp toothpicks. Older branches can be bent from spring to early summer by strings, weights, pieces of wood with sharpened nails or whatever can be used for this. Generally, limbs should be spread for at least one growing season.

Structure of a Fruit Tree

Three Year Old Branch of an Apple or Pear Tree

On the 1 year old wood you'll find mainly leafbuds. On the 2 year old wood flowerbuds and on the 3 year old wood, spurs. These spurs are short shoots, bearing fruits over several years. Occasionally they need to be thinned out.

During years with favorable weather, fruit trees may produce or "set" more fruits than they can properly develop. This will result in many small fruits at harvest. To improve the size of the fruits remove some young fruits as soon as possible after the fruit set. Remove the smaller fruits and leave the larger ones. Apples should be spaced 6 inches apart; plums and apricots at least 2-4 inches; cherries, cherry plums and pears are usually not thinned out. 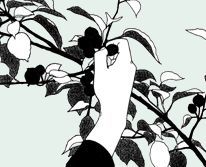 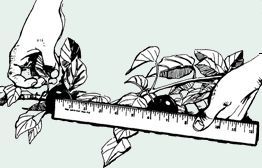